Demand for electric motors AIR in Ukraine remains stably high, what makes them so popular? The answer is obvious: simplicity of design and repair, as well as low cost. Inexpensive and efficient – this is how you can characterize asynchronous motors AIR, AIRМ. This type of engine is used very widely in agriculture: for pumps […]

The manufacturer LLC”DNEPRORESURS”offers you to buy ELMO electric motors of the AИР series for general industrial purposes in the basic configuration with a 2-year warranty. Technical characteristics of general industrial asynchronous motors ELMO are presented in the catalog. ELMO motors operate from a mains supply with a frequency of 50 Hz, voltages of 220, 380, […]

Demand for electric motors АИР in Ukraine remains stably high, what makes them so popular? The answer is obvious: simplicity of design and repair, as well as low cost. Inexpensive and efficient – this is how you can characterize asynchronous motors AИР. This type of engine is used very widely in agriculture: for pumps and […] 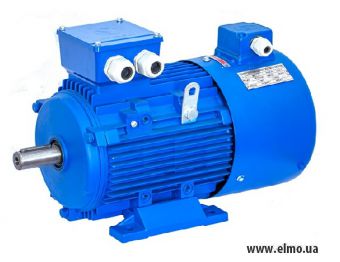 Asynchronous motors of general purpose with square-cage rotor, variable-frequency are designed for operation as a part of a single and (or) group frequency-controlled electric drive or from an alternating current network in S1-S9 mode at 50 Hz and 60 Hz.

The use of motors is possible with the following types of speed control:

Embodiment of the motors

Embodiment of the engines differs in the presence / absence of an independent ventilation system, electromagnetic brake, speed / position sensor (encoder).

The motors of standard type

There is no independent ventilation, speed / position sensor.

There are used such ventilation methods for the motors according to IEC 60034-6.

Nominal values of climatic factors for engines of dimensions 132-400 mm in a standard design or equipped with independent ventilation, when operating – according to GOST 15150 for products of the type of climatic design U3, U2, HL2, Т2.

Manufacturing of the motors of other climatic designs according to GOST 15150 requires preliminary approval from the Manufacturer.

*When operating the motors of climatic design T2 at an ambient temperature of +50 ° C, their nominal power is reduced by 10%.

The motors are designed for operation in a non-explosive area that does not contain corrosive gases, which destroy metals and insulation, which is not saturated with conductive dust.

The maximum dust content of the environment is not more than 100 mg / m3.

Nominal power is provided in a long operating mode at a temperature of 400 C and a height above sea level of not more than 1000 m.

The IP level of protection

The level of protection of the motors is IP54 according to GOST 17494.

If the Customer requires it is possible to manufacture the motors with the level of protection IP55.

The level of the influence of external mechanical factors

The group of the design of the influence of external mechanical factors is M1 according to GOST 17516.1

Delivery all over Ukraine

The quality system at the enterprise is certified in accordance with ISO 9001:2015

Specify your phone number and our managers will contact you shortly!